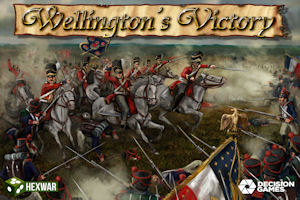 To commemorate the Battle of Waterloo, we will be releasing the digital edition of Decision Games’ Wellington’s Victory on iPad, iPhone and Mac on June 18th.

That morning at his headquarters in Le Caillou, Napoleon discussed the impending battle with his subordinates while awaiting the arrival of several French Corps which had bivouacked further south. Disagreeing with the French generals whom Wellington had consistently defeated in Spain, Napoleon insisted that his opponent was a poor commander and that the English troops were much inferior to the French. The battle which Napoleon envisioned would resemble ‘le petit dejeuner’, Wellington’s army would be devoured as easily as a light continental breakfast.