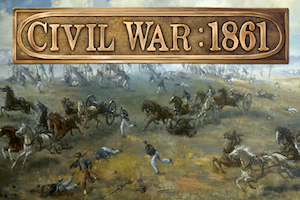 In 1861 both sides have plenty of volunteer recruits who, though enthusiatic, lack battlefield experience. On the weaponry side much of the equipment still belongs to the Napoleonic Era with a plethora of muzzle loading, smoothbore artillery.

Many of the commanders, who most would identify as the leaders the civil war armies, are still junior officers in the engagements recreated in this game. Command the Union or Confederate forces in these key battles.

Can you change history? Good luck and on to battle!